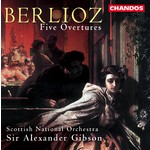 "This is music-making with plenty of character, unflagging gusto, and a forthright sensibility"
Fanfare

''Gibson and the SNO at their most dashingly committed.''
The Penguin Complete Guide

There are surprisingly few digital recordings of Berlioz's overtures available, and many will welcome these much admired readings back to the catalogue.

The recordings were made during Gibson's most creative and productive period with the Scottish National Orchestra, whose playing is here matched by a particularly rich and resonant Chandos sound.

Berlioz was writing the 'Scène aux champs' of his Symphonie fantastique at the same time as the Rob Roy overture, and there is something of the pastoral atmosphere of this movement in the central cor anglais melody of Rob Roy. The melody itself, however, played over a harp accompaniment, looks directly forward two years to the more rugged Byronic landscape of Harold in Italy.

Berlioz first read Shakespeare's King Lear while on holiday in Florence, and was inspired to write a concert overture based on it. The formidable spirit of King Lear is perceivable both at the opening of the Allegro and behind the extended Maestoso introduction. While certain points in the overture seem to represent particular events in the play, the overture is not programmatic in the sense of depicting a narrative; rather, it seeks to evoke the atmosphere of the play and the characters of its protagonists.

Bitter that, because of bad conducting, his opera Benvenuto Cellini was poorly received, Berlioz incorporated its lively saltarello into his overture Le Carnaval romain, where he hoped the piece would be shown in a better light. It received an encore at its first performance and Berlioz began advocating the practice of performing the piece as a prelude to the second act of Benvenuto.

The overture to Béatrice et Bénédict is the only true-bred operatic overture on this disc. The opera was inspired by the lovers in Shakespeare's Much Ado about Nothing.

Le Corsaire takes its inspiration from the town of Nice where Berlioz convalesced in 1831 and 1844. It uses a large orchestra - Berlioz specifies the need for 'no fewer' than fifty-nine strings.