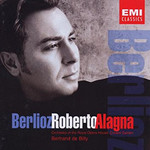 "There are few tenors, from any era, who could embrace the many and varied challenges presented here and do so with such success."
Editor's Choice - Gramophone Magazine (March 2003)

"Increasingly it's in the French repertoire that Roberto Alagna garners the greatest acclaim and this Berlioz collection - as well as this month's new Carmen with Angela Gheorghiu - merely serves to support that belief. What really impresses here is the range of the programme. There are few tenors, from any era, who could embrace the many and varied challenges presented here and do so with such success."
Editor's Choice - Gramophone Magazine (March 2003)

2003 marked the 200th anniversary of the birth of the great French composer Hector Berlioz (1803 - 1869), which was celebrated with concerts and special events all over the world.

To commemorate the anniversary EMI Classics will release an album of Berlioz's arias and songs performed by Roberto Alagna, who has received worldwide acclaim for his performances of French operatic repertoire.

"Alagna has always been at his very best singing in his native French," commented the Daily Telegraph, reviewing his recent album of French Arias, which he performed with Bertrand de Billy and the Orchestra of the Royal Opera House, Covent Garden. "This is one of the best recitals Alagna has ever recorded," claimed the Sunday Times and also Gramophone Magazine, which awarded the disc a coveted Gramophone Award last year. Alagna's tonal and expressive versatility is ideally suited to the works of Berlioz, who composed some of the most demanding tenor roles, all of which require a watertight technique, superb musicality, and a vast array of interpretative skills.

This is the first solo album ever devoted to this repertoire and has an especially personal resonance for Alagna: "Berlioz is certainly my favourite composer…what I admire the most about him is his taste for extravagance! I am also in awe of his skills in versification, his art of orchestration, and the fact that he doesn't compose specifically for one voice but for a personal ideal."

"I have always held a fascination for Berlioz the man as well as Berlioz the musician…I actually see a tiny bit of him in me! He was also self-taught, he also absolutely adored singing, and he greatly admired and was inspired by heroes of mine including Gluck, Spontini, Goethe, and Shakespeare..."

For the album, he joins forces again with Bertrand de Billy and the Orchestra of the Royal Opera House, and there are cameo appearances from two other celebrated artists: Angela Gheorghiu (as Marguerite in La damnation de Faust), and French actor, Gerard Depardieu (in Huit scènes de Faust and Lélio ou le Retour à la vie).

Roberto Alagna's career has gone from strength to strength since 1988, when he won the Luciano Pavarotti International Competition and made his stage debut as Alfredo in La traviata with Glyndebourne Touring Opera. In addition to highly lauded appearances in the world's most prestigious opera houses, he has made a host of award-winning, critically acclaimed recordings under his exclusive contract with EMI Classics, signed in 1993 and extended in 1998 to include albums of duets and complete operas with his wife Angela Gheorghiu.

Amongst a wealth of prizes and distinctions Roberto Alagna has been named 'Personnalité Musicale de l'Année' by the French media, and has received a prestigious Laurence Olivier Award for Outstanding Achievement in Opera. In 1997 he was named Lyric Artist of the Year by the Victoires de la Musique Française. In 2001 he received 'La Medaille Vermeille de la Ville de Paris' from the Mayor of Paris, Jean Tibéri, which is the highest honour that the Mayor can bestow on a French citizen. In 2002 he was also appointed an 'Officier de l'Ordre des Arts et Lettres'.