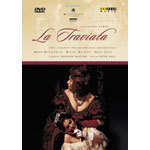 "Between them Hall and McLaughlin bring out the aching intensity of Violetta's predicament‚ and the soprano nicely distinguishes between the coquette‚ the woman in love and the tragic victim of circumstances. She gives her all to the role‚ her expressive eyes always telling us of her changing emotions. The DVD clarifies the orchestral sound and the voices, to the benefit of Bernard Haitink"s poetic, plangent reading...visual clarity reveals a newly immediate richness and authenticity of setting and costume" - Gramophone, February 2002

After "Aida" and "La forza del destino", ARTHAUS MUSIK offers another brilliant prelude to the forthcoming Verdi Year with this recording of the staging and television production of La Traviata by Peter Hall, under the baton of Bernhard Haitink, and with Marie McLaughlin in the title role. The opera was produced for the Glyndebourne Festival Opera in 1988. John Gunter's décor and costumes illustrate the Paris of the nineteenth century against the social background of the ancien régime. The producer draws a clear line between the splendid public lifestyle of Violetta and her modest private reality. Clocks everywhere recall the transience and brevity of the Traviata's life.

In 1852, together with Giuseppina Strepponi, with whom at that time he lived in the country, and who was later to become his wife, Verdi saw Alexandre Dumas' new play La dame aux camélias (based on Dumas' 1848 novel of the same name) at the Parisian Theâtre du Vaudeville. Dumas was one of the lovers of the "historical" figure Alphonsine (or Marie, as she called herself) Duplessis, the famous Parisian courtesan, who died in 1847 at the age of 23.