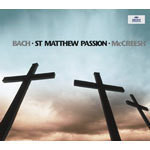 "With his modest forces, McCreesh's performance of the St Matthew Passion has a transparency and grace that can be quite breathtaking."
Recording of the Month - Gramophone Magazine (May 2003)

"Featuring some of our favourite singers of baroque music, this small-scale, movingly intimate and deeply felt version of this masterpiece is one of the most unusual. First of all there is no "choir": McCreesh uses only 2 groups of 4 singers each. After a century or more of oratorio-scaled performances this is a revelation: it has transparency, intimacy, urgency, rhythmic responsiveness and a sense that the chorales are addressed personally to the individual listener rather than being monumental edifices. Even the celebrated opening chorus has a tone of urgency that reflects the meaning of the text and one is aware more than ever of the way that musical materials are divided across the two groups in a way determined by the dramatic structure of the work as a whole. Mark Padmore's "Evangelist" is one of the most eloquent I've heard since Equiluz and Wunderlich and, to single out a singer for special attention, no one sings the alto arias with the intensity, emotional immediacy and humanity of Magdalena Kozena." (Keith)

"A radical approach to Bach's great St Matthew Passion by Paul McCreesh, his Gabrieli Players and a superb octet of singers - and that's the line-up: no chorus! McCreesh follows the scholarship first unveiled on disc by Joshua Rifkin with his one-to-a-part B minor Mass for Nonesuch and since espoused in concert by Andrew Parrott. McCreesh presents a number of arguments for his approach, one of which is the actual size of St Thomas's in Leipzig where the work was first performed. 'It's not a big church at all,' he comments. 'Part of the problem is that people look at the 18th-century engravings, which are designed to make it look four times bigger than it is.' With his modest forces, McCreesh's performance of the St Matthew Passion has a transparency and grace that can be quite breathtaking. Judge for yourself in the closing chorus."
Recording of the Month - Gramophone Magazine (May 2003)

For his recording of St Matthew Passion, Paul McCreesh is taking a radical yet convincing approach. Following the path he began with his previous Bach project (Magnificat and Easter Oratorio), he uses very limited forces - just eight singers, no chorus as such, and two chamber-size orchestras.

The use of single voices in Bach's Passions is certainly controversial; but since Joshua Rifkin started his pioneering work with single voices more than 20 years ago, many things have developed. Techniques on early instruments have improved and a cleaner yet fuller vocal style has emerged. Even more conservative listeners will acknowledge that this recording is a major achievement for Paul McCreesh.

The Times raved in a review of a concert that took place a few days before the recording:
"This was, most gloriously though, The Passion of Magdalena Ko√ená, whose alto arias were marvels of impassioned phrasing and coloring, inspiring the Gabrieli Consort's instrumental soloists to equally expressive and equally applauded virtuosity."
Mark Padmore was praised "as one of the increasingly moving and authoritative Evangelists of our time, [who] is the bright flame at the center of Paul McCreesh's performance".