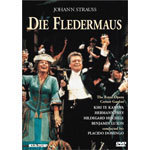 The operetta "Die Fledermaus" is Johann Strauss' most brilliant and best-known stage work. It's a glittering comedy packed with Viennese music that has become a firm favourite in opera houses all over the world. A top international cast really have a ball in this highly-acclaimed 1984 New Year's Eve performance from the Royal Opera House, Covent Garden, in which Placido Domingo makes a very stylish British conducting debut. Kiri Te Kanawa stars with her celebrated performance as Rosalinde, and the charismatic Austrian baritone Hermann Prey is Eisenstein, one of his trademark roles. The cast also includes Benjamin Luxon as Dr Falke and Hildegarde Heichele as Adele. The magnificent stage designs by Julia Trevelyan Oman recreate all the style and opulence of Viennese society in its golden period before the First World War. This production also features some very surprising celebrity guests at Prince Orlofsky's special gala performance party including comedians Hinge and Bracket, French singer Charles Aznavour and Merle Park and Wayne Eagling in Sir Frederick Ashton's specially choreographed pas de deux.

"An Austrian composer of Viennese waltzes; Johann Strauss is known as "the Waltz King." His almost 500 dance pieces are his crowning achievement, while his "Die Fledermaus" is the epitome of operetta."
-ALLMUSIC