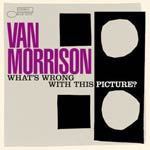 Van the man is back in very stylish form, invoking a smoky jazz club with swinging electric guitar lines and lush strings

'What's Wrong With This Picture?' is Van Morrisons debut release on Blue Note Records, the same label that brought you Norah Jones

'What's Wrong With This Picture?' features thirteen songs including eleven originals by the legendary vocalist and songwriter

Van Morrison bends his incomparable voice around the soul, blues, folk and jazz styles that have been the mainstay of his music for the past four decades

On several tracks, Van Morrison's love of the blues is well-represented, from the jump 'n' jive of the original "Whinin' Boy Moan" - his clipped syncopation etching the swing into the song - to the hopped-up rockabilly of Stop Drinking, a jubilant blues-shouting showcase based on Lightnin' Hopkins's "You Better Watch Yourself"

'What's Wrong With This Picture?' continues Van The Man's musical progression while integrating the past, invoking a smoky jazz club with swinging electric guitar lines and lush strings