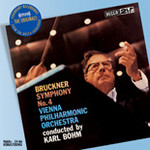 Karl Böhm recorded Bruckner's Third and Fourth Symphonies in Vienna for Decca and both are highly-acclaimed performances which are frequently recommended as top choices for these works- especially Symphony No.4:

'... the superlative Böhm who has been hiding his light under a bushel in recent years as a Bruckner conductor. This interpretation is really breathtaking in its unhurried majesty, about as broad as can be from start to finish (slow movement, scherzo and all) since Böhm ... has the rare gift of being able to sustain the broadest tempi convincingly and magisterially.'
Gramophone