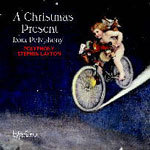 'This is a disc for listening to in peace, after the Christmas Day festivites are over and the visitors have gone' (Daily Telegraph)

Polyphony was formed by Stephen Layton in 1986 for a concert in King's College Chapel, Cambridge. Since then the choir has performed and recorded regularly to wide critical acclaim throughout the UK and abroad. "The outstanding feature was the superbly unified, balanced and expressive choral singing of Polyphony - a real wonder", writes the Independent on Sunday.

For the last few years, Polyphony has given annual sell-out performances of Bach's St John Passion and Handel's Messiah at St John's Smith Square. These have become notable events in London's music calendar and have been broadcast by BBC Radio 3 and the EBU, most recently in 2003. According to the Evening Standard "No one but no one performs Handel's Messiah better every year than the choir Polyphony", and the Times "would rate it among the finest John Passions I have ever heard".

Since its double BBC Proms debut in 1995, with Arvo Pärt's St John Passion, and Purcell's Dido and Aeneas, Polyphony's performance highlights include the world premiere of Oceanos by James Dillon and Schnittke's Symphony No 2 with the BBC Symphony Orchestra at the Royal Festival Hall. The choir performed a premiere concert of works by Arvo Pärt in 2003, and in November 2004 will give premiere performances of works by John Tavener at the Barbican in honour of his 60th birthday. Other broadcast highlights include works by Poulenc, Rautavaara and Tormis for BBC Radio 3, and an EBU broadcast of Bach's Christmas Oratorio. Recent performances abroad include concerts in France, Spain, Brazil, Denmark and Hungary.

Polyphony's extensive discography on Hyperion includes works by Pärt, Grieg, Grainger, Britten, Walton and Rutter. The CD of Britten Sacred and Profane won a Gramophone Award and a Diapason d'Or in 2001, and in 2002 a second Gramophone Award nomination followed for Polyphony's recording of Walton's choral music. Polyphony has recorded three discs of the music of John Rutter: Requiem with the Bournemouth Sinfonietta, Gloria with the City of London Sinfonia, and Music for Christmas. This CD was Classic FM Magazine's Disc of the Month in December 2001 and prompted Gramophone to write that "the artistry of the 25 full-bodied voices of Polyphony is beyond reproach".

Polyphony's recent release of works by Arvo Pärt, Triodion, was a BBC Music Magazine and Sunday Times record of the month. Containing five world premieres, it was recorded in the presence of the composer and has already received widespread critical acclaim. International Record Review calls it "a dazzling recording of such extraordinary music", according to the Telegraph "The singing on the disc is little short of stunning: Polyphony's sense of ensemble is second to none", and from BBC Music Magazine "This disc deserves the widest possible success."

WALTON
All this time
What cheer?

WARLOCK
Bethlehem Down
Lullaby my Jesus