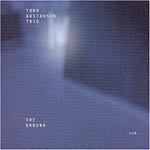 The eagerly awaited follow-up to "Changing Places", the most successful ECM debut of the last decade! The improvising of Gustavsen's Trio is always restrained, subtle, tasteful.

"The Ground" is the eagerly awaited follow-up to "Changing Places", the most successful ECM debut of the last decade!

With "Changing Places", young Norwegian pianist Tord Gustavsen not only captured the imagination of the world's jazz critics but immediately secured a very substantial international following.

The fact that Gustavsen's trio had already toured the globe backing popular singer Silje Nergaard was an advantage, but it was the universality of the pianist's writing for the group, the melodic hook-lines of his pieces and their deceptive simplicity, as well as a sense of easy, lilting groove that has helped the music speak to a large audience.

Although Gustavsen's sound, with its emphasis on quietude and contemplation, partly reflects Scandinavian directions, in many aspects the trio is the least "Nordic" of all the Norwegian groups on the ECM roster. Its big influences are from early jazz, from gospel music, from the blues, from Afro-Caribbean music, and from such singers as Bessie Smith and Billie Holiday. These earthy influences, filtered through a European sensibility that has also been touched by the impressionist composers gives the Gustavsen Trio its unique cachet.

"The Ground", as its name implies, is yet more earthy than it predecessors and its blues influence nearer the surface. The sound is mellow, caressing, sensual. The melodies are strong and simple - once heard they remain in the mind.