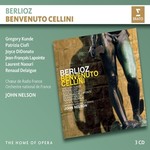 Met with hostility and incomprehension by its first performers and audiences, Berlioz' highly-coloured comic opera Benvenuto Cellini was subject to cuts and additions both before and after its disastrous Paris premiere in 1838. John Nelson's performance draws on the new edition by Hugh Macdonald and includes not only all the music that Berlioz originally presented to the Paris Opéra, some of it heard here for the first time, but also revisions made during the tortuous rehearsal period. Already remarkable by any standards, Benvenuto Cellini as Berlioz conceived it is a work of extraordinary invention and unprecedented virtuosity, written with a light touch and shot through with a rich vein of comedy.

'The first version of Benvenuto Cellini is one of the most extraordinary scores in the history of opera, and it is wonderful that, thanks to John Nelson and his intrepid forces, we have the chance to hear it. The celebrations for the bicentenary of Berlioz's birth have produced no result more welcome than this.'
- David Cairns

John Nelson's destiny as a Berlioz conductor par excellence became clear in 1972, when he took charge of America's first-ever complete performance of Les Troyens. "There's nobody who sounds like Berlioz," he has said, "He had an individual, original voice … audacity, originality and white-heat intensity."

'A splendid achievement. Here indeed is the 'verve and vitality' Berlioz always believed he had found.' - Gramophone

"Ciofi's voice is bright, delicate, and young-sounding, her rarely needed coloratura is impeccable, her ensemble work professional and well-integrated. Her French pronunciation is excellent. The American tenor Gregory Kunde stunningly fills in for Roberto Alagna, who was supposed to sing Cellini. He scrupulously obeys Berlioz's dynamic markings, even when they seem outlandish-phrases floating pianissimo up to and around high B-flats and higher-and his French style and class are on a par with Nicolai Gedda's: quite a compliment." 10/10 ClassicsToday

"The cast is first-rate. Laurent Naouri sings characterfully in the equivocal role of Balducci, treasurer to the Pope, and Patricia Ciofi is fresh and pure as his daughter, Teresa. Both are given important extra material: Balducci his opening aria, and Teresa a romance, later replaced by a cavatina, here given in an appendix." The Guardian