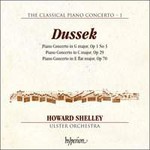 Following on from Hyperion's hugely popular 'Romantic Piano Concerto' series, the 'Classical Piano Concerto' focuses on the lesser-known concertos from the dawn of the genre. Between about 1770 and 1820-the high classical period dominated by Mozart, Haydn and Beethoven-musicians including Clementi, Cramer, Dussek, Steibelt, Woelfl and others made their names as composers and performers of piano concertos. This series aims to be the first in-depth recorded survey of this forgotten repertoire.

This first volume features three of Bohemian virtuoso Jan Ladislav Dussek's eighteen piano concertos, taken from different points in his career. As a group, these pieces are a fascinating study, with most of the earlier works largely reflecting the Mozartian model, and the later ones revealing stylistic traits sometimes at odds with the late eighteenth-century conception of the form, and anticipating future developments in the genre.

There could be no finer guide to the hidden gems of this repertoire than Howard Shelley, whose recordings of Clementi keyboard works, and Mozart and Hummel piano concertos, have received

'They are rewarding works … they sound especially effective in the persuasive hands of Howard Shelley … rhythms are consistently alert; the more lyrical passages bloom without excessive romantic milking; passagework is nimble; and most important, he manages to point up the music's harmonic twists without digging his elbows into our sides … the orchestral players respond deftly, and the engineers have captured the proceedings with Hyperion's expected clarity … a sure-fire hit' (International Record Review)

'Shelley plays and conducts the Ulster Orchestra, and he gives the music the weight and scope it deserves. Recommended to all' (AllMusic, USA)

'Shelley plays all these pieces as stylishly as ever … these pieces are a real find, and the disc augurs well for the series' (BBC Music Magazine)