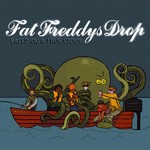 Fat Freddy's Drop
Based On a True Story

The debut studio album from one of Aotearoa's most loved and respected groups.

The legendary brotherhood of midnight marauders & purveyors of hi-tek soul, deliver an album which is steeped in dub, reggae & dancefloor electronica. Fat Freddy's Drop's music is a constantly evolving, organic experience, which is rhythm heavy with luscious coatings of jazz, soul & funk, rooted in Aotearoa & delivered with an Island attitude.

The album features 10 fresh slices of future funk, with surprises, fakes & freaky sidesteps throughout. There are new versions of live favourites like 'This Room', 'Hope' & 'Ernie' [also known as 'Willow Tree'], alongside the recent 12" 'Flashback' & six completely new tracks, all mystic supernovas of soul & phat goodness.