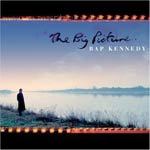 A collection of no-holds-barred tales of lovelorn sorrow, containing a song co-written with Van Morrison, plus a collaboration with Shane MacGowan. Also for Jack Kerouac fans, Carolyn Cassady features on the sublime "Moriarty's Blues".

"A set of stunningly beautiful songs full of simple truisms and staggering depth - imagine the best possible Van Morrison album with empathy replacing bitterness and a sense of wonder revealed for all to share in. Fabulous."
- 4 stars - Mojo magazine

Formerly lead singer with cult Belfast rock band Energy Orchard ("The most important Northern Irish group since Them" - NME), Bap Kennedy split the band in the mid-nineties and went to Nashville at the behest of friend and mentor Steve Earle.

Earle produced Bap's first solo offering, the critically acclaimed 'Domestic Blues' featuring a stellar cast of Nashville musos. The album hit #8 on the Billboard US Americana chart and Kennedy emerged as a serious contender. He released that and the follow up 'Lonely Street', along with an album of Hank Williams covers titled 'Hillbilly Shakespeare', on his own label.

Which brings us to the 'Big Picture', his latest collection of no-holds-barred tales of lovelorn sorrow, containing a song co-written with the master himself, Van Morrison, plus a collaboration with Shane MacGowan. Also for Jack Kerouac fans, Carolyn Cassady features on the sublime "Moriarty's Blues".

Recorded in part at Van's studio in Somerset, and embracing the influences of Tom Petty and Bob Dylan, 'The Big Picture' guarantees Bap Kennedy his rightful place as one of Ireland's best songwriters, hands down.

1. Rock And Roll Heaven
2. The Truth Is Painful
3. Moriarty's Blues
4. Streetwise
5. Too Old For Fairytales
6. Milky Way
7. Loverman
8. Fireworks
9. On The Mighty Ocean Alcohol
10. The Sweet Smell Of Success
11. The Beautiful Country

The Best of Van Morrison Volume 3