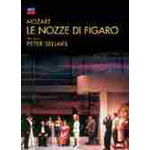 This unique version of Mozart's great comedy of manners 'Le nozze di Figaro' is one the three du Pont opera DVDs. Together they represent the three Mozart operas composed to texts by Lorenzo Da Ponte, presented here in contemporary stagings by the celebrated American director Peter Sellars. Sung in the original Italian but relocated to contrasting worlds of late 20th century USA, 'Le nozze di Figaro' takes place in the ersatz elegance of Fifth Avenue, 'Don Giovanni' in the darker streets of brownstone New York and 'Così fan tutte' in the chrome-&-neon surroundings of a seaside diner. The singer/actor ensemble with whom Peter Sellars worked on all three productions delivers a special level of theatrical credibility and dramatic conviction - not often witnessed in the operatic theatre and essential for the persuasive presentation of these adventurous contemporary settings.

For their first release on DVD, each opera now features both a LPCM Stereo soundtrack and a new DTS 5.1 Surround soundtrack.

Also included are the English subtitles supplied by director Peter Sellars himself, specifically created to match and enhance his personal vision of these popular operas.