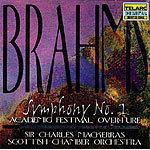 "An example of what's best in a new school of thought on the subject, the discs are indispensable." - Los Angeles Times

"An example of what's best in a new school of thought on the subject, the discs are indispensable." - Los Angeles Times

In July of this year, the centennial year of the death of Johannes Brahms, Telarc released a 3-CD boxed set of the complete Brahms orchestral works. The series, which has garnered enormous attention and accolades from the critics worldwide, is performed by the Scottish Chamber Orchestra under the direction of Sir Charles Mackerras. Sir Charles, a scholar and musicologist as well as a conductor, did extensive research into the performance practices and the actual size of the orchestra as it was during Brahms' own lifetime. He patterned the performances on these Telarc recordings on his findings, taking as his model the Court Orchestra of Meiningen, the orchestra with which Brahms was associated for a large part of his life.

Symphony No. 2 / Variations On A Theme By Haydn