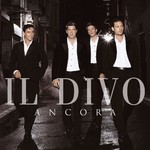 This is the follow up to Il Divo's NZ double-platinum self titled debut, and features such classics as "Hero", "Unchained Melody", plus a duet with Celine Dion ("I Believe In You") and much more.

'Ancora' is the follow up to Il Divo's NZ double-platinum self titled debut, and features such classics as Mariah Carey's "Hero", "Unchained Melody", plus a duet with Celine Dion ("I Believe In You") and much more.

Il Divo have broken the mould once and for all; the four classically trained singers have taken opera into the mainstream on a global scale. They are now firmly established on the world stage breaking all the rules and records in the process. The phenomenal sales of both their albums and concerts are testament to their amazing success story.

Their stunning new album 'Ancora', comes hard on the heels of their debut self-titled album, which has sold over 5 million copies - smashing Led Zeppelin's 25 year-old record of being the only band to achieve a number 1 album in the UK without a commercial single release! They have hit the number one slot in 13 countries and shown Robbie Williams how to do it stateside, where their album went straight in at number 4 and achieved top 5 placing in twenty-five countries.

Ancora takes original music and well-known tracks, both old and new, and turns them into masterpieces via the beautiful and distinctive voices of Il Divo. Modern classics are given a refined classical twist with lyrics sung in Spanish and Italian respectively. "I Believe in You" is a stunning duet performed in English and French with Celine Dion whilst classics "Ave Maria" and "En Aranjuez Con Tu Amor" are stamped with the rich Il Divo signature.

New tracks including "Isabel" and "Si Tu Me Amas" are beautiful romantic ballads that showcase the breathtaking harmony of these four exceptional and very different voices that come together to create the unique Il Divo sound. 'Ancora' was recorded in London and Sweden with recording giants Per Magnusson and David Kreuger, and world-renowned producer Steve Mac who also produced their debut album.

How To Lose A Guy In 10 Days (Original Soundtrack)