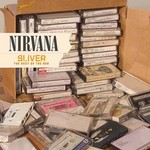 Nirvana
Sliver: The Best of the Box

This single CD highlights the most significant recordings from the box set 'With The Lights Out', and features the inclusion of three bonus tracks of previously unreleased recordings.

Nirvana changed the course of popular music forever and remain an inspiration to those who have followed. The band's musical legacy was illuminated further in November 2004 by the release of the critically acclaimed 3 CD/DVD box set 'With The Lights Out', the definitive collection of Nirvana rarities and outtakes.

Nirvana's 'Sliver: The Best of the Box' highlights the most significant recordings from 'With the Lights Out', compiled onto a single CD. 'Sliver: The Best of the Box' features 19 tracks from the box set and also includes 3 previously unreleased recordings: "Spank Thru" (from 1985's 'Fecal Matter' demo tape featuring Kurt Cobain on guitar and Dale Crover of the Melvins on bass and drums); "Sappy" (1990 studio recording); "Come as You Are (1991 pre-Nevermind rehearsal recording).

'Sliver' includes a 24 page booklet with rare photos and detailed notes and quotes from the band.