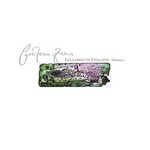 All the tracks from across the their entire career have been compiled to form 'Lullabies To Violaine: Singles & Extended Plays' in two double sets. 'Volume 1' covers the band's 4AD era [1982-1990].

"A gateway to another, entirely more beautiful world - there will never be anything quite like them."
- Q magazine

"Fifty-nine tracks of the most rapturous music you'll ever hear… every moment of this is a gift. In the most literal sense, the Cocteau Twins remain peerless."
- The Guardian

"Consider 'Lullabies To Violaine' an early gift to oneself."
- Billboard

Hindsight is a wonderful thing. When the Cocteau Twins first emerged, they were compared to Siouxsie & The Banshees. In fact, as each of their records cumulatively proved, the Cocteau Twins never sounded like anything or anyone else. Taken together, their 9 albums and 16 EPs/singles, sound less like a band and more like an element of nature. Or a freak of nature.

Even in that first incarnation with bassist Will Heggie joining mainstays vocalist Liz Fraser and guitarist Robin Guthrie, the Cocteau Twins charted their own course - from their stark, mercurial debut 'Garlands', described in the press of the day variously as "haunting", "spellbinding" & with a "frosting of sweetness"; to '83, when Fraser & Guthrie fell into a relationship and recorded the 'Head Over Heels' album as a duo, where Fraser could be heard forming her own language [re: Sigur Ros], recognizable words emerging and submerging in a maelstrom of her own, coated and drowned in Guthrie's swelling guitars.

Joined by bassist Simon Raymonde in '83 [after a side project with This Mortal Coil], the group hit the UK Top 30 with "Pearly Dewdrops' Drops" and continued evolving in their sound. Bolstered by their success with #1 albums & EPs in the indie charts, an incredible show at the Royal Festival Hall, the Cocteau Twins' sound moved through ornate and opaque ['Treasure'], to an increasingly abstract, 'floating' sound ['Victorialand'], before taking a break during '87.

This break produced 'Blue Bell Knoll', warmer and lusher than ever, but more concentrated and concise too - before the release of '90s 'Heaven Or Las Vegas': an audible release of tension and a surge of unfettered love that is many folks' favourite Cocteau Twins album. 4AD label boss Ivo Watts-Russell labels it his favourite and the best record his remarkable label has released.

Ironically, this was to be their final album made for 4AD. The group who helped to define what the press used to call the "4AD sound" left the nest, releasing two more albums ['Four Calendar Café' & 'Milk And Kisses'] before disbanding in '96. 4 years later the 4AD retrospective 'Stars & Topsoil' served as a reminder of the trio's uniquely bewitching music.

Gathering together their numerous single & EP releases recorded during the group's long, illustrious and ultimately remarkably influential career, these two 2CD collections include songs which soundtracked many classic '80s & '90s moments and highlight the ethereal, haunting, spellbinding strength of the Cocteau Twins' songwriting. A pair of wonderful albums.