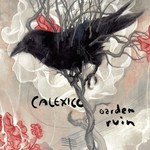 Fans of Calexico have already come to expect the unexpected from Tucson, Arizona residents Joey Burns and John Convertino, from their dusty, lo-fi debut SPOKE (1996) to the noir-infused dramatic power of THE BLACK LIGHT (1998), the breakthrough, mariachi madness of HOT RAIL (2000), to their hugely successful most recent album, FEAST OF WIRE (2003), which flirted with ambient electronica and Gil Evans-infused jazz, charting in 14 European countries.

GARDEN RUIN is the band's fifth album. It is where Calexico fill those dusty, empty landscapes they've long documented with a big, big sound. Taking full advantage of the rockin' Calexico live band, the record distils its multicultural roots, the input of a producer, new domestic arrangements, international affairs, broadening horizons, developing ambitions and changing scenery. It's not your average Calexico album, but then again, it never is with this band.

"They create an iconic road-movie soundscape, which crosses borders and cultures, picking up characters and instruments along the way”
- The Independent (reviewing a 2006 concert)

"Burns's new lyrical direction represents one of the richest, most promising veins to be found in Calexico's new direction”
- PopMatters.com

Tea for the Tillerman