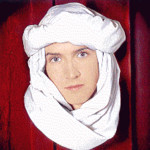 Here we have the self-titled solo debut from The Reduction Agents' singer /songwriter and former Brunette! A truly eclectic, yet strangely cohesive collection of touching pop.

'Lawrence Arabia' is the self-titled solo debut album from The Reduction Agents' singer-songwriter and former Brunette!

As is the norm for these solo projects, Lawrence Arabia [who does his daily financial errands under the name James Milne] found he had written a body of work that "didn't quite fit in with the style of his band project".

Lawrence set to work on recording these songs as quickly as possible, using whatever instruments and inspiration was on hand at the time and recording mostly in his back yard shed in Grey Lynn, with a little help from Ed Cake, Harry Cundy and Sam Scott - and with the sound of cicadas bleeding into the songs, informing the summery/insecty vibe of the album.

The album is unified only in its diversity, jumping from Dylan-esque stoner nonsense R&B ['Thistle Tends To Stingle'] to semi-apocalyptic, Beach Boys inspired no wave death disco in a rather short space of time.