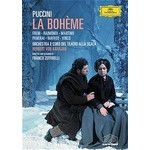 "A Bohème you can believe in." (The New York Times)

In the early 1960s, Herbert von Karajan joined forces with the world-famous stage director Franco Zeffirelli for a milestone production of La Bohème.

Filmed at the famed Teatro alla Scala in 1965 and directed for the cameras by Zeffirelli himself, this production was acclaimed for its revelatory treatment of the central two acts.

This DVD features the young Mirella Freni in her career-making performance as she showcases her superb singing and excellent acting.

"A Bohème you can believe in." (The New York Times)

A production of UNITEL, Munich