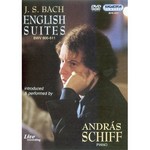 "The 6 Bach English Suites are a collection of dance movements, a summation of compositional styles and keyboard technique with no known English connection. This is relatively early Bach, mostly composed at Cothen before 1723. Andras Schiff plays them on this Hungaroton DVD with his customary intelligence and brilliant technique. He introduces each suite with fascinating analysis and keyboard examples. It is like a Master Class for pianists. The performances were filmed on February 11 2003 in concert at the Budapest Academy of Music. A nice touch is the occasional superposition of the score onscreen at key points of the Suites. This makes the experience of these beautiful dance movements a feast for the mind as well as the ears.

Schiff's piano style is historically informed, obviously influenced by the authentic performance movement. His tempos are fleet, he doesn't linger over notes (no 19th Century rubato here), there is little use of the pedals. Bach played on modern piano rather than the earthier harpsichord sounds more abstract to my ear. What the modern piano provides as compensation is superb control over dynamics. This expressive dynamic control is where Schiff truly shines. These performances are marvelous. I've been playing this DVD constantly for days. It is a gem. I hope Schiff intends to release more Bach in a series. The menus allow one to acess any or all movements, skip or play the introductions (which must total 40 minutes or more). If Bach played on modern piano is amenable to your taste, I urge you to try this superb DVD before it disappears.

Picture format is full screen with a 4:3 aspect ratio. The picture is crystal clear. Region code is 0 worldwide. Sound formats are PCM 48khz stereo and Dolby Digital 4.0 Surround. They both sound spectacular with the Dolby 4.0 providing a deeper soundfield and nice rear ambiance. Subtitles are in Magyar, English, German and French. Schiff recorded his introductions in both Hungarian (Magyar) and English. Total time of the disc is 175 minutes.