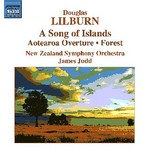 "A Kiwi legend is handsomely served by his homeland. While it is clear in practically every note of this disc that the Kiwi composer Douglas Lilburn studied with Ralph Vaughan Williams, that's no bad thing. And James Judd and his New Zealand forces find an openness and an energy in the music that evokes all the majesty of that country's landscape."
Editor's Choice - Gramophone Magazine (Dec 2006)

"Imagine your excitement if you were a musicologist who'd just discovered some long lost Sibelius tone poems. Those hearing this release may well feel that way as New Zealand born Douglas Lilburn obviously owes a substantial debt to the great Finnish master as evidenced in some of the symphonic works presented here. That's particularly true of the Aotearoa and Drysdale overtures as well as the tone poems Forest and A Song of Islands. This is not meant to imply that Lilburn's music is overly derivative, because he definitely has something new and interesting to say. In fact Aotearoa, which is the native name for this land down under, stands very much on its own as a thrilling piece that's wowed British audiences for some time. You'll undoubtedly find it equally exciting along with the other three selections previously mentioned. The program is filled out with three additional pieces. A Birthday Offering was written to honor the tenth anniversary of the New Zealand Symphony Orchestra, which is featured on this disc. It's a wonderfully impish sounding work with an opening quote from Aaron Copland's Appalachian Spring plus some delightful orchestral eccentricities reminiscent of those found in Sir Malcolm Arnold's more irreverent creations. Then there's the Festival Overture, which is a high energy piece that in places may remind some of the opening of William Walton's first symphony. The program ends in stately fashion with a Processional Fanfare, which was originally composed for the University of New Zealand and contains references to the old student song Gaudeamus igitur. It's too bad Lilburn isn't alive to hear these magnificent performances from one of today's truly great conductors, James Judd. The recorded sound is excellent and audiophiles should take note. By the way, if you don't already know them, you'll also want to investigate this composer's three symphonies (Naxos-8.555862)."
--Review by Bob McQuiston, Classical Lost and Found, October 2006

Known as 'the elder statesman of New Zealand classical music', Douglas Lilburn was instrumental in establishing a genuinely vernacular voice. All the works on this recording portray New Zealand's culture through an idiom instantly recognisable to listeners familiar with the music of Sibelius and Vaughan Williams (one of Lilburn's teachers).

Amongst the best known are Aotearoa (Land of the long white cloud), A Song of Islands, a tone poem which finds its parallel in New Zealand regional paintings, and Lilburn's first major orchestral work, the Drysdale Overture, a beautifully evocative depiction of the isolated hill country farm where the composer spent his childhood.

"James Judd secures playing of nimble polish and infectious dedication from his excellent Kiwi band. Moreover, his patient, warm-hearted interpretations are as shapely as they are concentrated." The Gramophone on Lilburn Symphonies (8.555862).

"The freshness of inspiration is a delight, superbly brought out in these fine performances from New Zealand, with James Judd" The Guardian on Elgar's Wand of Youth (8.557166).