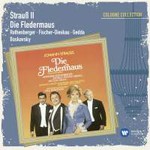 The original source for Die Fledermaus is a farce by German playwright Julius Roderich Benedix (1811-1873), Das Gefängnis (The Prison). Another source is a French vaudeville play, Le Réveillon, by Henri Meilhac and Ludovic Halévy. Their play was first translated by Carl Haffner as a straight play to be produced in Vienna. However, the peculiarly French custom of the réveillon (a midnight supper party) caused problems, which were solved by the decision to adapt the play as a libretto for Johann Strauss, with the réveillon replaced by a Viennese ball.

"Rothenberger is a sweet domestic-sounding Rosalinde, relaxed and sparkling if edgy at times, while, among an excellent supporting cast, the Orlovsky of Brigitte Fassbander must again be singled out as the finest on record, tough and firm, The entertainment has been excellently produced with German dialogue inserted. The remastering is admirably vivid." (Penguin Guide)