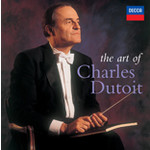 This 6-CD orchestral spectacular features mainly recordings with the OSM but the Orchestra National de France is also included in Poulenc, while the Philharmonia is included with a popular tone-poem by Saint-Saëns (the earliest recording included here), and among the various works by Stravinsky is his recording of the two Stravinsky orchestral symphonies with the Suisse Romande

Charles Dutoit was born at Lausanne on 7 October 1936 and this set of discs is released to mark his 70th birthday.

Dutoit studied violin and music theory at Lausanne Conservatory and had his first conducting lessons there. Moving on to Geneva he obtained a diploma in conducting and in the late 1950s gained practical experience as a conductor. Further conducting studies included a period at Tanglewood with Charles Münch in 1959. In 1964 Dutoit was appointed second conductor of the Berne Symphony Orchestra and became principal in 1967. Dutoit first appeared with the Orchestre symphonique de Montréal as guest conducor in 1977 and later that year he was appointed Music Director.

Dutoit had already made a number of records with various orchestras and soloists for Decca when he signed an exclusive long-term recording contract with Decca in 1980. This was the start of a remarkable recording partnership with Montreal which produced numerous outstanding recordings of predominantly French repertoire. The first recording under this deal was a demonstration-class recording of the complete Daphnis et Chloé, a recording which won numerous awards and sold in huge quantities. Dutoit recorded all of Ravel's orchestral works and his opera L'enfant et les sortilèges to great acclaim and a complete cycle of Debussy's orchestral music and Pelléas et Mélisande followed. (The Ravel orchestral works are available as a box set: 475 6891 and Debussy orchestral music is available as part of box set 475 313-2). The Dutoit/Montreal partnership lasted over 20 years and during that time a number of major orchestral tours gave audiences around the world the opportunity to hear for themselves the magic created by this conductor and orchestra.

Dutoit also appeared as a guest conductor with many orchestras and held appointments and worked regularly with the Philadelphia Orchestra, London's Philharmonia Orchestra, NHK Tokyo, and the Orchestre National de France - to name but a few. With all of these - and other orchestras - Dutoit recorded many albums.

This 6-CD orchestral spectacular features mainly recordings with the OSM but the Orchestra National de France is also included in Poulenc, while the Philharmonia is included with a popular tone-poem by Saint-Saëns (the earliest recording included here), and among the various works by Stravinsky - a composer Dutoit has always had great success with - is his recording of the two Stravinsky orchestral symphonies with the Suisse Romande (a recording that has been deleted for some time and which has been requested for reissue on a number of occasions). By way of a special bonus a DVD is included in which Dutoit conducts a Prokofiev programme of a suite from Romeo and Juliet with dancers from the Toronto Dance Theatre and a performance of the "Classical" Symphony … but this is no "standard" orchestral concert…!

GERSHWIN:
An American in Paris