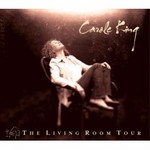 On this special double disc set, Carole King draws from her entire, 40-plus year career, her early hits with Gerry Goffin, her 'Tapestry'-era masterworks, plus recent recordings and overlooked gems.

No one performs Carole King's classic songs better than she does. On this special double disc set, King draws from her entire, 40-plus year career, her early hits with Gerry Goffin, her 'Tapestry'-era masterworks, plus recent recordings and overlooked gems.

Disc one of 'The Living Room Tour' ends with a show-stopping medley of songs King wrote with Goffin, songs that became the soundtrack of a generation in the 1960s. The album offers two new tunes: the opening "Welcome To My Living Room" and the tender "Loving You Forever," a duet co-written with guitarist / vocalist Gary Burr, which opens the second set. She is also joined by album co-producer and guitarist Rudy Guess, who together with Burr, add vocals and textured acoustic touches on many of the album's songs.

Disc 1:
1. Welcome To My Living Room
2. Peace In The Valley
3. Love Makes The World
4. Now And Forever
5. Where You Lead I Will Follow (with Louise Goffin)
6. Lay Down My Life
7. Jazzman
8. Smackwater Jack
9. Wishful Thinking
10. Medley: Take Good Care Of My Baby / It Might As Well Rain Until September / Go Away Little Girl / I'm Into Something Good / Hey Girl / One Fine Day / Will You Love Me Tomorrow