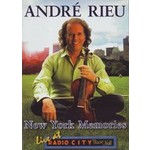 The 'New York Memories' DVD is a visual spectacle filmed at Radio City Music Hall. During this performance André and his Johann Strauss Orchestra perform a unique mix of the high points of American and European romantic music.

Besides the well-known tunes from films and musicals, he also plays the world-famous hit by Frank Sinatra "My Way" and the fabulous "Music of the Night" from The Phantom, both as wonderful violin soloist, as well as the moving "Nuns' Chorus" by Johann Strauss and the fiery Italian song that is so popular in New York, "Torna a Surriento".

Other highlights include "I will follow him" from the musical 'Sister Act', "Amigos para siempre", the stirring waltz from the film 'The Godfather' and, entirely unexpectedly, the superhit "A Whiter Shade of Pale", daring but wonder ful as a violin solo accompanied by a Hammond organ.

Songs From My Heart - Live in Maastricht
more suggestions…