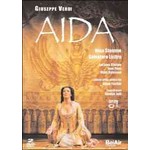 The Zurich Opera presents a stunning new production of Verdi's most popular, most spectacular work.

Responding superbly to the role, Swedish soprano Nina Stemme - she of the richly clear voice - offers an Aida vibrant with love and emotion.

Heading a magnificent cast, she makes a poignant couple with talented tenor Salvatore Licitra as Radamès.

Luciana d'Intino is nothing less than brilliant in the role of Aida's rival Amneris and Juan Pons imbues his Amonasro with enormous humanity.

Conducting the Zurich Opera orchestra and chorus, Adam Fischer brings out all the score's musical and dramatic majesty.

An Aida connoisseur - he has already directed the work several times - Nicolas Joël transposes the action to the period of the opera's première, at the time of the opening
of the Suez Canal.

Ezio Frigerio's sumptuous sets provide a spectacle drenched in the colours of the time of Napoleon III.
Nicolas Joël was just nominated to succeed Gérard Mortier as artistic director of Paris National Opera from 2009.
This new version has been acclaimed by audiences and critics alike.

Special feature: The Story of Aida. A film by Louis Wallecan.