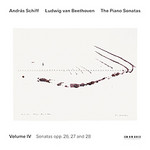 "So, for those collecting Schiff's cycle, or for those wanting just these four sonatas, there is no need to hesitate. This one is a winner"
(Fanfare September 2007)

"So, for those collecting Schiff's cycle, or for those wanting just these four sonatas, there is no need to hesitate. This one is a winner" (Fanfare September 2007)

"Schiff's playing is always beautiful, always suffused with a lovely, fluid singing quality. Nothing ever seems hurried, nothing is obscure. If his interpretations of these four early-ish sonatas might here and there feel a touch delicate, that doesn't compromise their integrity. Beethoven isn't always a tough, macho composer; where he is, for instance in the dramatic finale of the "Moonlight" Sonata, Schiff meets the challenge head on."
Stephen Pettitt, Sunday Times

"Andreas Schiff's Beethoven Sonata cycle, recorded in the somewhat boomy acoustics of Zurich's Tonhalle, continues to be stimulating and provocative, always forcing one to hear such familiar music in a new light. A magnificent release." (Instrumental Choice of the Month BBC Music August 2007)

"…whether the performances illuminate or irritate, Schiff consistently conveys a sense of timbral differentiation between registers akin to the instruments of Beethoven's time, together with their unique pedal effects. For example, listen to the pungent resonance of the bass notes in the Op 26 first-movement minore variation, or how the vaporous haze of the Moonlight's celebrated Adagio sostenuto never turns muddy." Gramophone Magazine, October 2007

The fourth instalment of Schiff's complete Beethoven includes the sonatas opp. 26, 27 and 28 - highly accomplished works of strong individual features that were written in 1800 and 1801. Even in the famous "Moonlight"-sonata the Hungarian's attention to detail leads to unexpected listening experiences. "Nobody in the hall will have heard this first movement like that before" wrote Peter Hagmann in the Neue Zürcher Zeitung reviewing the recital in Tonhalle Zurich where the sonatas are recorded live for ECM. "Not the kind of over-demonstrative approach which has become common these days lies at the heart of this interpretation but the consequent and courageous scrutiny of the musical text." The booklet offers an extensive conversation between András Schiff and Martin Meyer on the repertoire and its interpretation.