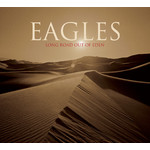 Eagles
Long Road Out of Eden

Iconic band the Eagles are back with this specially priced 2CD set - their first full album of new material since 1979!

Yes, it's true! Iconic band the Eagles are back with their first album of new material since 'The Long Run' from 1979!! Entitled 'Long Road Out of Eden', this specially priced 2CD set is their first full studio release in 28 years and features the excellent first single "How Long".

One of the most popular, successful rock bands of all time, the Eagles are Glenn Frey, Don Henley, Joe Walsh and Timothy B. Schmit. Their 'Greatest Hits 1971 - 1975' is the best-selling album in recorded music history in the United States, with sales in excess of 29 million copies.

The band has sold more than 120 million albums worldwide, earning four No. 1 U.S. singles and four Grammy Awards. Their recent DVD release 'Farewell I Tour: Live from Melbourne' was filmed on one of the top-grossing tours in history and has been certified 14 x platinum. The Eagles were inducted into the Rock & Roll Hall of Fame in 1998.

The End of the Innocence

The Best of / 20th Century Masters