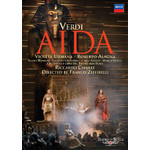 The operatic event of 2006, following Roberto Alagna's exit from the production during the second performance.

Spectacular new production by veteran director/designer Franco Zeffirelli has all the luxury, theatricality and opulence one could wish for in this most grandest of operas, keeping to tradition and shying away from minimalist modern intrepretation.

French tenor Roberto Alagna was filmed in early performances before his high-profile departure from the production. This alone makes it a must-have DVD for all opera fans.

Lithuanian soprano Violeta Urmana in the title role and the powerful Hungarian mezzo Ildiko Komlosi as her rival, Princess Amneris. Riccardo Chailly conducts a top cast at La Scala, 'the home of opera'.

The Inaugural Concert (recorded in October 2009)