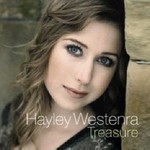 We don’t have this item in our warehouse or stores at the moment, but the supplier has stock. We should be able to get it to you in 2 - 4 weeks from when you order it.

'Treasure' is a celebration of Hayley's family roots, and her grandparent's journey accross the World on the first boat that left Ireland for New Zealand in the 1880s - taking with them a rich musical heritage. Her grandmother (a singer), and her grandfather, (who played the accordion), were to be important influences on Hayley's musical development.

Hayley's first recordings of her own songs bring together all these musical influences. They include her compositions "Let Me Lie" and "Summer Rain" plus her lyrics to a haunting lute song by the Elizabethan English composer John Dowland, called simply "Melancholy Interlude".

"I come from a musical family, and one with a real sense of history. My forefathers, who came from Ireland, were on the Midlothian's maiden voyage from England to Christchurch, New Zealand in 1851.

My grandmother used to sit me on her knee and sing songs like "Danny Boy" from as early as I can remember, and each one had a fascinating story of its own. A singer herself in her earlier years, she has always been a never-ending source of songs, and she travelled round the country picking up new songs to perform. It's this legacy of music that she's been passing down to me since my childhood, and it's many of these beautiful old songs that I've explored here on my new album.

But new music has to be written, new songs created, otherwise we are robbing the future of a past, and I've included on my album some new songs that I have written with people I've met on my travels around the world. I love the idea that in years to come, songs that I have sung, and maybe even some that I have helped to create, might get passed down through generations of families until they too become a part of history."
- Hayley Westenra

1. Let Me Lie
"This is an original song that I co-wrote with Sarah Class, who arranged the music for my first album, 'Pure'. It was a beautiful sunny June day in London. I was staying round at a friend's place and the sun was begging me to go outside so I went and lay down on the grass, which I hadn't done for a while, and I immediately felt at peace. The song describes the connection we have with the earth."

3. Shenandoah
"This is an American folk song that originated as a river shanty but became popular with sea-going crews around the early 1800s, and another of my Grandmother's favourites. There are literally dozens of verses, but I've chosen the ones that mean the most to me. It's great how the music evolves like this."

4. Summer Fly
"I first heard this song a few years back and loved the feel of it. It was only after closely listening to the lyrics that I realised it was about the feeling of being young and how summertime simply flies by all too soon."

5. Whispering Hope
"I believe this is an American hymn, I first heard it in New Zealand, where it isn't as well known. We recorded the song with a choir. It's a very hopeful song which feels like a breath of fresh air."

6. Danny Boy
"There's a bit of mystery behind the origins of the song. The lyrics first appeared in print in a traditional Irish music book, however I believe it was an English/American creation. Nanna and I used to sing the song all the time. When I told her on the phone I was going to record it, she just started singing it back down the line to me."

7. Summer Rain
"This is a song I had the idea for but didn't have chance to develop, until one day I sat with a songwriter who was in my band on a US tour called Jeff Franzel, who developed it with me as only experienced songwriters can. It's a love song describing the way love can revive just like the rain on a warm day. I had the melody and had the lyrics and really wanted to take the song to completion, give a bit of structure to it. Sometimes those little details make the difference"

8. The Last Rose Of Summer

9. One Fine Day
"This is from Puccini's opera 'Madame Butterfly', which is set in Japan. The lyrics are originally in Italian, however I have recorded it in English. Long before I was old enough to go to the opera itself I had heard this version that I am performing here. It's in more of a song format, perhaps less dramatic than that performed by the divas of the time, but none the less poignant in that the story is just as gripping carried on a melody, that must rank among the greatest of the last century."

10. Sonny
"This is Irish in origin and is one of my favourite songs of all time. It's one that I've recorded with just the vocal and a piano. It's about a mother singing to her son, saying, 'Don't leave me here by myself; your father's gone away; don't leave me.' Absolutely heart-breaking! My great-grandmother was Irish so it's in the blood and I can vividly remember turning the words into pictures as she sang it to me."

12. Melancholy Interlude
"This is a John Dowland piece. He's an English Renaissance composer and I first heard it played on guitar and loaded it straight onto my laptop. I was in Japan at the time and it was about 2 o'clock in the morning and got so excited hearing it! I just thought, 'Wow, this has an amazing melody and would work really well as a song' so I immediately started writing lyrics to it. Maybe I should be scared that all the John Dowland fans (he has a fanatical following) are going to hunt me down!"

13. Abide With Me
"This is a very well known hymn in the UK and while it would appear to be quite a sombre song, it's actually a hymn which has the ability to pull you from your despair. I've recorded the first verse a cappella as I think the words deserve to be pondered upon and fully taken in."

River of Dreams: The Best of Hayley Westenra (Special Edition)