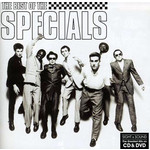 $40.00 In stock with supplier
ETA: 2-5 business days add to cart more by this artist

The Best of The Specials covers music that the band recorded between 1979 and 1984. Along with the group's debut single Gangsters, the album also includes both of The Specials' UK number ones: Too Much Too Young (1980) and an extended version of Ghost Town (1981).

Also featured are several songs that cracked the UK Top 10, including A Message To You, Rudy, Rat Race, Do Nothing, a medley of Stereotype and Stereotypes (Part 2), as well as the Special AKA 1984 protest song Nelson Mandela.

The 20-track CD compilation collects all their key singles and album tracks, along with a DVD compilation of their promo video clips.

Legend: The Best of Bob Marley and The Wailers: Deluxe Edition

My Aim is True: Deluxe Edition