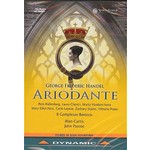 G : - "...this is a very very good DVD of a great Handel opera. If you yourself need to expand your horizon and move into the baroque - or know someone who would like to do so - then you will be hard put to start with anything better."
(MusicWeb Recording of the Month June 2008)

"This is good: Handel without histrionics. The music and words speak to us without singers hurling themselves about the stage in paroxysms of ecstatic love or bewailing their despair. Plenty of emotion but no cataclysms of it.

Of course, it is a simple story with no sub-plot to confuse or obfuscate; simple because it is based on love, sex, betrayal, jealousy and explanation with reconciliation. Ariodante, the King's son and Ginevra love each other. Polinesso, the Duke of Albany, loves (or lusts after) Ginevra who dislikes him intensely; whilst he himself is loved by Dalinda, the lady in waiting to Ginevra. So besotted is Dalinda that she is persuaded by Polinesso to dress that night as Ginevra and to admit him to her apartment via a secret garden-door. As Polinesso intended, Ariodante witnesses this. Unbeknown to all, Ariodante's brother Lurcanio, in love with Dalinda, also sees these events. When told the following day of Ginevra's supposed conduct, the King denounces and condemns to death his 'wanton' daughter who temporarily 'loses her marbles'.

Meanwhile, Ariodante wandering alone rescues Dalinda from Polinesso's hired assassins and learns the truth from her. Lurcanio kills Polinesso in combat and all are reconciled. Well certainly in the Handel score and libretto: but Director John Pascoe adds a touch of wilfulness to his production set in 1957. He adds nothing to the text but immediately before the final curtain he depicts the abdication of the King in favour of his daughter and soon-to-be son-in-law who themselves then down the trappings of majesty and run to the back of the stage. Well the original libretto was based on the topsy-turvey world of Ariosto in Orlando furioso, so why not.

Pascoe chose 1957 because this production, among others in 2007, celebrated the 50th anniversary of the Spoleto festival. Bringing it forward to a time of living memory works well providing that you accept one or two oddities/anachronisms. For example the king condemning his daughter to death because he believes she spent the night with the 'wrong' man. Even assuming he had the power, I would have thought that in 1957 such would have been 'swept under the royal carpet'. Remember that it was not for another 12 years that Royal 'openness' started to appear (1969) when for the first time cameras were allowed to film the young British Royal family at home. Second, mortal combat in 1957? - I think not, even though the opera is set in Scotland. And before that comment leads to complaints please look at my surname.

But does any of that or similar 'difficulties' really matter. No, because this production carries all before it in a wave of understated but totally convincing baroque opera at its best.

The first time I watched this DVD I did wonder about the lack of the extremes of tempi. Later I watched conductor Alan Curtis in his introduction talking about this and justifying his decisions. I was tempted to retort: well he would say that wouldn't he? However on the second and subsequent runs-through I concluded that whatever Handel might have thought, the pace chosen for each number brought out the essence of the music. With dynamics to match, the singers are afforded every opportunity to excel - which is precisely what they do.

Ann Hallenberg sings the title 'trouser' role, with perhaps a hint of gentle underplay: contrasting to her advantage with other performers of this role. She has total note accuracy throughout her required wide range with splendidly non-noticeable transfers from head to chest. Her excellent runs and her soft trills provide great pleasure; as does the balance of sound with Laura Cherici as Ginevra. They are a seriously good vocal foil for each other.

With just an occasional early suggestion of vocal waywardness (which never re-appears), Cherici makes joy shine through her words in Act I particularly in Volate, amori with superb runs and trills. And converts that to convincing depths of misery at the end of Act II. She is completely persuasive of the highs and lows of her role.

The twin-set and pearls of Marta Vandoni Iorio seem to me to raise the level of awareness of her role if only because of the contrast with the more regal, military or evening costumes of the others. She does not have the most powerful voice but it is ideal for this comparatively small theatre and to balance with this cast. This is a totally relaxed Dalinda, comfortable in her role, with vocal clarity, gentle runs and attention holding arias and duets.

Mary-Ellen Nesi is a Polinesso justifiably popular with the audience. Alan Curtis, in his introduction, refers to a preference for a mezzo-soprano to a counter-tenor in this role because he says that generally a mezzo has greater versatility in the lower register. He re-enforces his point by telling us that Handel wrote this role for a female voice.

What is without doubt is that Nesi despatches the role with superbly judged supercilious arrogance and strong coloratura. If there is occasional 'body-waggle', it is a small price for runs and trills of such pleasure and some gloriously deep mezzo notes. I particularly enjoyed the vocal and dramatic interchanges with Iorio. Nesi is bored by Iorio's dogged devoted attention whilst Iorio quietly smoulders with some 'come hither' looks. Acting of a high order to accompany vocal excellence. Taken to a different level with a nazi-style salute at the end of Nesi's aria to dishonesty Se l'inganno (disc 1 Act II track 5 after Iorio's aria Se tanto al piace cor). She repeats the salute in her aria before the King Dover, giustizia but twists her arm in convincing embarrassment at her thoughtless display. Two moments which now seem a bit 'John Cleese-ish' but are anything but: this is 1957, only 12 years after the end of World War II: the memory of evil was still strong.

Zachary Stains sings the faithful Lurcanio with his distinctive and enjoyable timbre. He convinces vocally (and in acting) of the strength of his love compared with the devious protestations of Nesi. Here is a clear and assertive Lurcanio. He is allowed to effect one dreadful stage situation for a few bars whilst singing to Dalinda of his love for her. In this production she has remained on stage for his aria Del mio sol vezzosi rai part of which he sings kneeling, with his arms around her waist, as she ungainly leans forward over his shoulder. It looks unnaturally awful - the incomplete rugby tackle or fireman's lift - but it does allow her to look down at him as they untangle as if seeing him with new eyes: but for me the price for that dramatic touch is too great.

I sometimes think that a bass role with any coloratura, baroque or otherwise, presents difficulties for that vocal register. Here Carlo Lepore copes well with the earlier aria Voli con la sua tromba (sic in booklet and DVD scene summary but he correctly sings Voli colla sua tromba). He is outstanding later in Invida sorte avara with his wonderfully deep, almost black, voice. Vittorio Prato despatches the role of Odoardo with suitable gravity.

The ballet scenes at the end of Act II rely upon the role-play of characters in the opera and are no less, if not more, effective for that. The sets are also extremely effective. The lighting is very good - unobtrusive for the daylight scenes and suitably atmospheric for the night time. The silhouettes and tableaux are outstanding. They are particularly striking where movement of other characters occurs during 'intervals' in an aria but ceases immediately the aria resumes leaving tableaux upon which the camera focuses well. Another excellent feature of this production is the number of times characters remain on stage after their aria - not all 'exit arias' here. Similarly characters who are supposedly not on stage, sometimes are. Both features add very considerably to plot continuity. In addition Pascoe makes use of side mirrors and a descending Order of the Garter insignia. The significance of the former is self evident. He explains the significance of both in his introduction which you may find convincing.

What is incontrovertible however is that this is a very very good DVD of a great Handel opera. If you yourself need to expand your horizon and move into the baroque - or know someone who would like to do so - then you will be hard put to start with anything better."
(MusicWeb Recording of the Month June 2008)