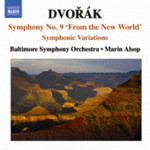 This recording by the Baltimore Symphony Orchestra and Music Director Marin Alsop is the first of three discs of Dvořák symphonies taken from live performances at Joseph Meyerhoff Symphony Hall. The most popular of all Dvořák's works, Symphony No. 9 'From the New World' makes an immediate appeal by virtue of a seemingly inexhaustible flow of melody and sparkling orchestration. Based on a melody he had composed earlier for men's chorus, I am a fiddler, the Symphonic Variations are one of the composer's most beautifully crafted and beguiling works.

MusicWeb - Recording of the Year 2008

"The Largo is given one of the most perfectly shaped and unaffectedly styraightforward performances I have heard, led by a magnificently vocal cor anglais solo."
Disc of the Month (BBC Music Magazine July 2008)

"Marin Alsop, having moved into main-line repertoire with a highly praised set of the four Brahms symphonies, now undertakes what for me is the greatest individual 19th-century Romantic symphony, Dvořák's New World - already recorded by almost everyone who matters! But she makes it very much her own, with her fine Baltimore orchestra responding with an account full of warmth, moments of high drama, and, above all, finely paced with a flowing, spontaneous feeling. One notes the delightful flute-playing, the bold, strong trombones in tuttis, and the luminous grace of the strings, immediately apparent at the affectionate opening of both first and second movements. The delicate close of the Largo, after the songful repeat of the beautifully simple and very lovely cor anglais melody, is memorable. The movement's central episodes are equally poetic, particularly the gentle clarinet theme over the murmuring bass pizzicnti.

The Scherzo bursts in, and the finale has all the impetus one could want. Yet overall, Alsop's is not a histrionic reading but one full of affectionate touches, the appealing little nudge at the end of the second subject of the first movement for instance, while the closing retrospective section of the finale is particularly satisfying, leaving me saying to myself yet again in pleasure: "What a lovely work this is."

What makes this disc doubly recommendable is the superb account of the Symphonic Variations, inspired but surprisingly neglected. It is a work which after the mysterious opening Lento e molto tranquillo, which is perfectly captured here, needs to move on flexibly but with plenty of impetus, capturing the continual changes of mood and colour. The extraordinary variety of invention and scoring captivates the ear, sometimes perky, sometimes gentle (like the enchanting little repeated-note flute solo, followed immediately by gruff trombones), until it reaches its genial fugal apotheosis and the performance sweeps to its folksy, grandiloquent close. The recording is outstanding in every way, well balanced and vivid in detail, heard within the naturally captured acoustic of Baltimore's fine Symphony Hall."
--Review by Ivan March, Gramophone, August 2008

"an account full of warmth, moments of high drama, and above all finely paced with a spontaneous forward flow...Throughout, the recording is outstanding in every way" Penguin Guide