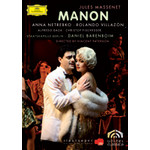 Netrebko was born to play the title role: her voice and body language capturing the fluctuating personality of the complex Manon, one minute girlish, the next introspective. "She is a real stage animal, constantly reacting to what is happening around her", wrote Opera of her performance. Villazón is compelling as Des Grieux, expressing all the burning passion of the doomed lover in his burnished, supple tenor

This is a production with a distinct Hollywood touch: first-time opera director Vincent Paterson has previously worked with Madonna, Michael Jackson and Paul McCartney and staged several Broadway musicals. He has already enjoyed great success with his first classical DVD project for DG: The Woman - The Voice featuring Anna Netrebko

Given his show-business background, Paterson interprets Manon as a Hollywood cinematic tale for the opera stage with Massenet's colourful music as a kind of soundtrack. The press raved about the opera event of the year in Berlin, while the live public screening of one of the performances in the square in front of the opera house attracted an audience of more than 20,000 people

Musically, the production is equally accomplished. The Staatskapelle Berlin is conducted by Daniel Barenboim, who "infuses the appealing melodies with colour and is finely attuned to the emotional fragility they express" (Süddeutsche Zeitung)