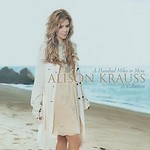 Alison Krauss
A Hundred Miles or More: A Collection

Alison Krauss remains an artist who transcends styles and boundaries, challenging herself in every arena. Her voice is pristine and commanding; while on fiddle and viola she provides everything...

"Krauss‚ influence extends far beyond bluegrass and far beyond her own albums."
- USA Today

'A Hundred Miles or More' is an album that encompasses Alison's diverse career as a master vocalist, instrumentalist, collaborator and producer. This collection is comprised of 16 tracks, highlighting Krauss' career outside of her traditional releases with long time band Union Station. The album features Alison's collaboration with John Waite on the single "Missing You" which also appears on Waite's release 'Downtown....Journey of a Heart'.

'A Hundred Miles or More' also features Krauss' contributions to film soundtracks including the Oscar nominated songs, "The Scarlet Tide" and "You Will Be My Ain True Love" written for the motion picture 'Cold Mountain' and "Down to the River to Pray" from the film 'O Brother, Where Art Thou?' Known for her collaborations, Krauss also includes several duets in the collection such as the 2003 hit with Brad Paisley "Whiskey Lullaby" and her duet with James Taylor for the tribute album 'Livin', Lovin', Losin': Songs of The Louvin Brothers', "How's the World Treating You". The collection debuts five new songs - "You're Just a Country Boy","Jacob‚s Dream","Simple Love","Lay Down Beside Me" and "Away Down the River" - all of which feature Krauss as a producer.

Since 1987, Krauss has released eleven albums on Rounder, four solo, six with Union Station and one with The Cox Family, including her acclaimed 2005 Grammy winning release 'Lonely Runs Both Ways' and the double-platinum selling albums 'Live' and 'Now That I've Found You'. To date she has earned more Grammy awards(20 in all) than any other female artist. She has also received multiple Country Music Association Awards and International Bluegrass Music Awards among countless other honors.

What Am I Gonna Do?