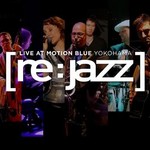 This CD features fantastic live versions of their greatest interpretations from their past releases, two brand new recordings, plus a 90-minute DVD documentary about [re:jazz] touring and performing live in Japan.

[re:jazz] are back in 2008 with their first live album, recorded at the Motion Blue in Yokohama and a DVD documentary by Markus Bader, filmed during the Japan tour in April 2007.

Beside fantastic live versions of their greatest interpretations from their past releases you will hear two brand new recordings on this live album for the first time: "All Over" written by Inga Luhning and "Can You Live" a re-interpretation of Volker Meitz's wonderful tune.

Highlights include "All I Need" with its new & intense Udo solo by percussionist Heiko Himmighoffen and "People Hold On" - a big band version on the last album 'Expansion', is transformed into a swing version for the septet.

Besides the live album there is a 90-minute DVD documentary about [re:jazz] touring and performing live in Japan, with interviews, plus a recording session with Alice Russell.