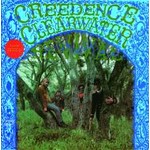 This special re-issue contains four bonus tracks: "Call it Pretending" (the B-side of the band's first single), the band's first recording of a cover of Bo Diddley's "Before You Accuse Me" (later re-recorded for Cosmo's Factory), a live version of "Ninety-Nine and a Half" recorded at the Fillmore Auditorium in 1969, and a full-length live version of "Suzie Q." Almost famous former Rolling Stone editor Ben Fong-Torres wrote the notes.