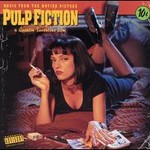 Re-mastered and pressed on 180 gram vinyl, this LP record is an exact replica of the original 'Pulp Fiction' package. The album contains a voucher enabling the purchaser to download MP3 versions of the songs within.

To celebrate the 60th anniversary of the long playing record, Universal Music have released this classic title on much loved 30 cm black vinyl.

Re-mastered and pressed on 180 gram vinyl, this LP record is an exact replica of the original 'Pulp Fiction' package. The album contains a voucher enabling the purchaser to download mp3 versions of the songs within.

As with all of Tarantino's films, music plays a major role. 'Reservoir Dogs' set the tone in 1992 with it's amazing selection of sounds - and immortalised an obscure single from the '70s (Stealer's Wheel "Stuck In The Middle With You") as a song to slice ears off by!

The 'Pulp Fiction' film is a unique, mysterious, entertaining crime story and the music on this disc perfectly captures the wild, violent, humorous style of the on screen action. It is essentially a Quentin Tarantino mix-tape, twisting and weaving together an amazing variation of tracks.

Opening with Dick Dale's ripper guitar instrumental "Misirlou", the wash of surf music is interspersed with sound bites of dialogue from the movie, with some golden oldie classics thrown in for good measure. These include Dusty Springfield's gorgeous "Son of a Preacher Man", the rock'n'roll fun of Chuck Berry's "You Never Can Tell" and the Reverend Al Green's very moving "Let's Stay Together".

And let's not forget the fried chicken funk of Kool & The Gang performing "Jungle Boogie" and the Urge Overkill's show-stealing, seductive cover of Neil Diamond's "Girl, You'll Be a Woman Soon".

The movie is a must see and the soundtrack is a must have!"
- GEOFF & MARTY

Side 1:
1. Pumpkin And Honey Bunny
Dialogue spoken by Tim Roth and Amanda Plummer

15. Bring Out The Gimp
Dialogue spoken by Peter Green and Duane Whitaker

17. FLOWERS ON THE WALL (2:23)
Performed by The Statler Brothers
Produced by Jerry Kennedy
Written by Lewis C. DeWitt

19. SURF RIDER (3:19)
Performed by The Lively Ones
Written by Bob Bagle, Nole Edwards