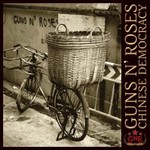 'Chinese Democracy' is the first album of new material from one of rock's most influential bands since the 1991 simultaneous releases of 'Use Your Illusion I' and 'Use Your Illusion II'. The album features 14 songs, so that equates to less than one track per year! Only three have previously not been let out, either from live performances or online leaks. Billboard reports that "the only three unfamiliar tracks are "Scraped", "Sorry" and "Prostitute", while a song originally known as "The Blues" appears to have been renamed "Street of Dreams"."

'Chinese Democracy' is one of the most highly anticipated albums in music history. It's release marks a historic moment in rock n' roll - Guns N' Roses fans have every reason to celebrate!