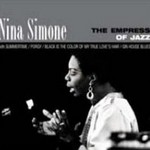 Nina Simone
The Empress of Jazz

Nina Simone is often referred to as the High Priestess of Soul and the Empress of Jazz, but the influence of this 15-time Grammy Award nominated singer, songwriter, pianist, arranger and civil rights activist reaches much further than that.

Eunice Kathleen Waymon (1933 - 2003) originally aspired to be a classical pianist and is generally classified as a jazz musician but her music covers an eclectic variety of styles, from jazz, soul, folk r&b and gospel to pop music.

Her vocal style is characterised by intense passion, a loose vibrato and a slightly androgynous timbre, in part due to her unusually low vocal range. She was famed for paying great attention to the musical expression of emotions.

Best known for incredible songs like My Baby Just Cares For Me, I Loves You Porgy and To Be Young, Gifted & Black, but also for her tempestuous nature and volatile moods - which we now know was due to bipolar disorder, first diagnosed in the mid '60s but kept secret until '04 - Simone was truly a genuine superstar of the highest order, with talent to burn.

'The Empress of Jazz' is a specially compiled collection of studio and live recordings assembled to highlight a handful of Simone's "classics" (Summertime, Cotton-Eyed Joe, Black Is The Colour Of My True Love's Hair) alongside a clutch of lesser known tracks, and long-forgotten live recordings.