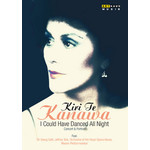 The Portrait
Dame Kiri Te Kanawa's story has all the best elements of an operatic fairytale. Coming from a part-Maori background she went on to become one of the world's most famous opera stars. In this exciting portrait, Kiri Te Kanawa talks about her life and her career in a series of revealing in-depth interviews. The documentary shows Kiri Te Kanawa recording Strauss's „Four Last Songs" with Sir Georg Solti and the Wiener Philharmoniker, singing in a small English country church in the presence of the Prince of Wales as well as rehearsing and performing „Arabella" and „Capriccio."

The Concert
Early in 1990, Dame Kiri Te Kanawa made a triumphant return to her native New Zealand, culminating in an open-air concert in Wellington, where an audience of over seventy-five thousand people enjoyed music ranging from Puccini to Gershwin. Just over a year later, she delighted an invited audience at Christopher Wren's Chapel of the Old Royal Naval College in Greenwich, London, with a programme of Handel and Mozart. Highlights of these two performances are "Tu che di gel sei cinta" from Puccini's „Turandot"; "O mio babbino caro" from „Gianni Schicchi"; Mozart's "Exsultate, jubilate"; "I Could Have Danced All Night" from the musical „My Fair Lady"; and many more.