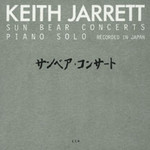 The famous Sun Bear concerts recorded in Japan in 1976, digitally remixed in 1989.

"Before beginning this review, I imagined writing one line and one line only: Let the music speak for itself. And while such a move does have a certain charm, if not arrogance, I can only hope that the following attempts to transcribe what Keith Jarrett's Sun Bear Concerts say to this listener might convey even the humblest fraction of the wonders therein. Over the course of two weeks in November of 1976, Jarrett laid his hands to keys in five major Japanese cities for an historic series of improvised concerts. The result was a 10-LP set, now telescoped to six CDs, that must be heard to be believed. Within this modestly typographed grey box beats one of ECM's profoundest creative hearts. In light of this, a more fitting line might read: Keith Jarrett is music itself. Let it only be the beginning."
- Tyran Grillo via ecmreviews.com