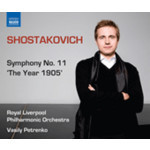 "This is pretty terrific on all counts. I recommend it accordingly, and look forward to the continuation of the cycle."
(ClassicsToday 9/9)

"And this is a very fine performance. With the Liverpool Phil on top form, responding to every one of Petrenko's demands, it is a resounding success. It is electrifying in the way that a concert performance is - indeed, it's hard to believe that this was recorded over two days, so immediate is the impact of the playing. The recording has an astonishingly huge wide dynamic range, the opening chords are so quiet that are, when played at a normal volume setting, almost inaudible. Turn the colume control up and the recording is as clear and bright as one could wish for. Every department of the orchestra is exceptionally well balanced, not an easy job in some of the fuller parts - and there are some very full tuttis - and, best of all, at the very end where the bells describe major and minor thirds in G the clangour is left to reverberate after the music has ended - absolutely thrilling."
(Recording of the Month MusicWeb May 2009)

Charismatic young conductor Vasily Petrenko launches his Shostakovich Symphonies series with the Eleventh, a highly charged depiction of the 'Bloody Sunday' massacre of over two hundred peaceful demonstrators by Czarist soldiers outside the Winter Palace in St Petersburg in 1905. Scored for a sizeable orchestra of triple woodwind, four horns, three each of trumpets and trombones, tuba, timpani, percussion, celesta, harps and strings, the Symphony makes extensive use of revolutionary songs as thematic elements, as it progresses, without pause, from the glacial opening movement, Palace Square, to the terrifying massacre and its aftermath, The Ninth of January, the funereal third movement, Eternal Memory, and the final movement, The Tocsin, which culminates with cataclysmic bell strokes.