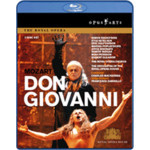 "If one of the cast it to be named above the rest, that should be Joyce DiDonato, an outstandingly accomplished Elvira, brilliantly projected, interestingly conceived, her singing concentrated in tone. Miah Persson is an adorable Zerlina, and I liked what she and others were encouraged to do by way of vocal ornamentation. Of the men, Giovanni is the least tested vocally though it's all to the good if he can turn a serenade as ingratiatingly as Keenlyside does. Mackerras at the helm is such a reassuringly familiar and well loved figure that we may be tempted to take him for granted."
(Gramophone)

"as flames rage over the opening cast credits, Sir Charles Mackerras conducts an incandescent Overture which kindles the brilliance, clarity and indefatigable energy of his music direction throughout. This film powerfully captures the fiery essence of Francesco Zambello's production for the Royal Opera. ...consistently strongly cast, it's as good for the ear as for the eye. Zambello makes Simon Keenlyside's harsh and diabolical Don Giovanni and Kyle Ketelsen's embittered Leporello a double-act of deadly dependency."
(BBC Music)

Recorded live at the Royal Opera House, Covent Garden, London, on 8 and 12 September 2008.