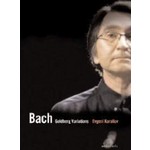 "The Yevgeni Koroliov Euroarts DVD performance of the Goldberg Variations is the most convincing interpretation of this masterpiece I have encountered since the Andras Schiff live recording from 2001 on ECM. It also features the most stunningly varied articulation I have encountered for a long time, from a pianist and some of the most interesting new interpretations of certain variations. The journey Koroliov takes you on with this performance is of extraordinary range: from the most giddily playful invention to the depths of despair and anxiety, the emotional and musical journeys are intertwined profoundly in this performance." (Keith@Marbecks)

"The Yevgeni Koroliov Euroarts DVD performance of the Goldberg Variations is the most convincing interpretation of this masterpiece I have encountered since the Andras Schiff live recording from 2001 on ECM. I adore the "Goldbergs" - I collect recordings of them and have several favourites for various sections (even recordings I do not admire overall have some things to recommend them, even a "bad" performance can be instructive).
Koroliov, performing at the Gewandhaus hall in Leipzig in 2008, provides a convincing and yet completely new take on how to play this work: it is unlike any other I have encountered, certainly on occasion a little like Gould or Tureck at their (for me unfortunately rare) best, Gulda, Schiff and Richter. Some of it has a quality Koroliov shares with Schiff, that of variety of articulation and touch coupled with a singing tone and a sense of playfulness and wit. I think they share as well a certain emotional reserve, a recognition of the formal, symmetrical nature of the framework which necessarily structures the possible ways of embellishing the polyphony.
They are quite individual interpretations but which I find totally convincing: Koroliov has made me sit there without watching and just listen as I read the score, to see more clearly the decisions being made, especially in terms of phrasing and articulation on a note by note basis: I call this "microphrasing".
Because of this attention paid to microphrasing time and again I was taken aback by some of the decisions, mixtures of staccato and legato phrasing, giving the playing, even at its most fleet and rapid, a strongly singing, vocal quality, the lines "breathe" and articulate as if they were flights of coloratura in a vocal work like a cantata.
It is tremendously rhetorical playing, expressive but still highly controlled and delivered with effortless virtuosity (the toccatas, for example, are played faster and at the same time more eloquently than any others I have found in other performances).
Although the recording as a whole is fairly long, around 88 minutes, and some movements are extremely slow if one is used to faster recordings (the 25th variation for example lasts for more than 10 minutes), this extreme is balanced by a tendency to play movements with rapid figuration extremely fast. Just as pianism this is highly impressive but it is of course more than that: similarly Koroliov's reading of the piece is more than tempo extremes, if it were not at the same time alert to the multitude of possible moods and atmospheres of each of the variations.
I note the constant reworking of the texture of the performance, its changing and unpredictable use of phrasing, using various shades of legato, staccato and marcato, accentuation and dynamics that are constantly varied from formal unit to formal unit).
There is an extremely articulated, "microphrasing" of the lines, extending beyond embellishment of the polyphonic lines to a sort of constant manipulation of the individual sounds that embody those lines and therefore constitute the textures heard by the listener.
The "Aria" in particular is amazing: so moving and troubled under its outwardly tranquil appearance. It is singing, capricious and extremely precise and eloquent. It is playing with (in all senses) Empfindsamkeit. The da capo reappearance of the Aria at the end, now shorn of the repeats is beautifully judged, troubled but with a quiet strength as well, beautifully sustained and with singing tone.
It also features the most stunningly varied articulation I have encountered for a long time, from a pianist and some of the most interesting new interpretations of certain variations. The journey Koroliov takes you on with this performance is of extraordinary range: from the most giddily playful invention to the depths of despair and anxiety, the emotional and musical journeys are intertwined profoundly in this performance." (Keith@Marbecks)

"…Koroliov… uses the full resources of his magnificent Steinway, and the spontaneity with which he moves from the lightest of touches to grand sonorities is one of the many fascinating aspects of this riveting performance." BBC Music Magazine, March 2009 ****

The Goldberg Variations, which was printed in 1741 as 'Clavierübung IV. Teil' was later named after Bach's 14-year-old pupil, Johann Gottlieb Goldberg. Evgenij Koroliov was even younger when he discovered Bach - he heard Glenn Gould in Moscow in 1957 and was influenced by the legendary Russian pianists Maria Judina and Sviatoslav Richter. In the 1960s and '70s he won important piano competitions ranging from the Van Cliburn to the Grand Prix Clara Haskil. In cooperation with the Bachfest Leipzig, EuroArts was able to convince the reclusive pianist - who is still only known in specialist circles - to produce this recording of an exiting recital in summer 2008.