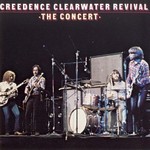 This classic performance from CCR was recorded at the Oakland Coliseum on the night of Saturday, January 31, 1970.

Creedence Clearwater Revival were made of different stuff. They were, in a sense, the last of the great rock and roll bands. They had the superb tightness which only this amount of experience can bestow, and what's more, their taste and instincts were as pure as their roots.

By 1970 they had enough hits of their own to fill a complete set, and the stretching-out was saved for the end, where the longtime closing number, "Keep on Chooglin'," allowed them to rock it up and leave everyone on their feet. It was a song no one could keep still to, and it generated such a good-time feeling that an audience just naturally ended up dancing in the aisles or on the seats.

Such was certainly the case at the Oakland Coliseum on the night of Saturday, January 31, 1970, when this concert was recorded.