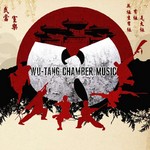 'Chamber Music' is a fresh, fully sanctioned album from Wu-Tang Clan. It contains all original material. No outtakes. No bootleg material. No b-sides. No leftovers!

When Wu Tang Clan exploded all over the hip-hop scene in 1993, as cliché as the following phrase has become, their sound was truly like no other out there: nine drastically different MCs (with a supporting cast that tripled the count) tied together by love of kung fu; old movies; their home Island (A.K.A. Shaolin, A.K.A. Staten); and RZA's obtuse, otherworldly funky beats. While it's near impossible to tab any rappers of the day as influences, with 'Chamber Music', the legendary squad celebrates some of their favorite rappers from back in the day, featuring all of the surviving players collaborating with other innovative rhyme merchants like AZ; Kool G Rap; Masta Ace; and Sadat X. While there's a level of vanity about the proceedings, the collection ultimately works, mainly thanks to the pure fun these major hitters are having as they push each other's game up line by line.

"There's an organic old-soul crackle to the incendiary trumpet-bursts on 'Sound the Horns'..."
-PITCHFORK