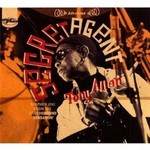 $28.00 In stock with supplier
ETA: 2-5 business days add to cart more by this artist

Tony Allen is arguably Africa's greatest kit drummer. As co-creator with Fela Kuti (whose band he played in for 15 years) of the hugely popular & influential Afrobeat style, Tony is one of the continent's most important artists. He has inspired generations of musicians worldwide and is a legendary figure amongst fans of funk, jazz, hip-hop & African music in general.

'Secret Agent', Tony's debut album for World Circuit - the release of which incidentally, coincides with the 40th anniversary of the aforementioned Fela's album, 'The '69 Los Angeles Sessions' - is his first return to the studio since he became a co-founder with Damon Albarn & Paul Simonon of The Good, The Bad and The Queen. Self-produced, this majestic slice of hardcore funky Afrobeat was recorded in Lagos, Paris & London, using his regular hard-drilled touring band with full horn section. The vocals are handled by Tony himself alongside his specially selected group of singers from his native Lagos, Nigeria.

And as for the drumming on this 11 cut masterwork of world music... Tony drives the music on - straight as an arrow - in a loose-limbed ragged shuffle, fusing the cross rhythms into one irresistible forward motion. It's truly marvellous stuff.